Response rates are primary endpoints in many oncology trials; however, correlation with overall survival (OS) is not uniform across cancer types, treatments, or lines of therapy. This study explored the association between objective response (OR) and OS in patients with chemotherapy-refractory metastatic Merkel cell carcinoma who received avelumab (anti-PD-L1).

Eighty-eight patients enrolled in JAVELIN Merkel 200 (part A; NCT02155647) received i.v. avelumab 10 mg/kg every 2 weeks until confirmed progression, unacceptable toxicity, or withdrawal. Using conditional landmark analyses, we compared OS in patients with and without confirmed OR (RECIST v1.1). We applied a Cox model that included OR as a time-varying covariate and adjusted for age, visceral disease, and number of previous therapies.

Patients with OR by 7 or 13 weeks had significantly longer OS than patients without, confirming that early OR is an endpoint of major importance. 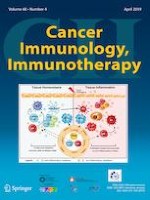 Prognostic value of tumour-infiltrating CD8+ lymphocytes in rectal cancer after neoadjuvant chemoradiation: is indoleamine-2,3-dioxygenase (IDO1) a friend or foe?