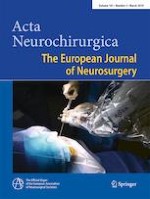 Pharmacological management of post-traumatic seizures in adults: current practice patterns in the UK and the Republic of Ireland

Letter to the editor - Infection

Variation in neurosurgical management of traumatic brain injury: a survey in 68 centers participating in the CENTER-TBI study