The efficacy of portal pressure reduction by beta-blockers and the utility of serial hepatic venous pressure gradient (HVPG) measurements for the management of small (≤5 mm) esophageal varices in patients of cirrhosis are not clear.

The study had the following aims: to study (1) the effect of propranolol on the growth of small varices and (2) whether single or serial HVPG measurements result in a better outcome compared to no measurement in patients with small varices.

Consecutive cirrhosis patients with small varices, without any history of variceal bleed, were randomized to receive propranolol or placebo and to undergo no HVPG, only baseline HVPG, or serial HVPG measurements.

A total of 150 cirrhotics (cirrhosis predominantly viral or alcohol induced) were included (77 in the beta-blocker and 73 in the placebo group). Baseline characteristics were similar. The actuarial 2-year risk of growth of varices (primary endpoint) was 11 and 16% in the propranolol and placebo group, respectively (P = 0.786). Variceal bleeding and mortality were also comparable in the two groups. Similarly, the outcome was not influenced by HVPG measurements (whether serial, only baseline, or no HVPG). A bilirubin level of ≥1.5 mg/dl was found to be an independent predictor of variceal progression.

In cirrhotics with small esophageal varices, nonselective beta-blockers are unable to prevent the growth of varices, variceal bleed, or mortality. HVPG monitoring of these patients did not change the outcome; however, the role of HVPG-guided therapy modification needs to be studied. 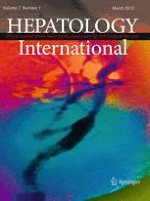 Etiopathogenesis of primary biliary cirrhosis: an overview of recent developments

The safety and efficacy of peginterferon plus ribavirin in hepatitis C patients concomitant with malignancy other than hepatocellular carcinoma: a multicenter study