ERAS guidelines recommend early removal of urinary drainage after colorectal surgery to reduce the risk of catheter-associated urinary tract infections (CAUTI). Another recommendation is the postoperative use of epidural analgesia (EA). In many types of surgery, EA was shown to increase the risk of postoperative urinary retention (POUR). This study determines the impact of early urinary catheter removal on the incidence of POUR and CAUTI under EA after colorectal surgery.

Eligible patients were scheduled for colorectal surgery within the local ERAS protocol between April 2015 and September 2016. Urinary drainage was removed on the first postoperative day while EA was still in place (early removal group (ER)). The incidences of POUR and CAUTIs were recorded prospectively. Results were compared with a historical control (CG), which was operated between October 2013 and March 2015.

Early removal of urinary drainage after colorectal surgery while EA is still in place is feasible; it reduces the incidence of CAUTI but increases the risk of POUR. Thus, screening for POUR in patients with failure to void after six to 8 h is mandatory under these clinical conditions. 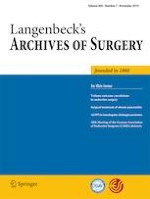