5th metatarsal stress fractures are frequently encountered in professional football. There is concern that early return to play following intra-medullary screw fixation may lead to an increased risk of delayed union. The purpose of the study was to assess whether an early return to play after surgical fixation of 5th metatarsal fractures in professional football players is a risk factor for delayed union and the effect of this on the ultimate clinical outcome.

At a minimum follow-up of 24 months the mean return to play was 10.5 weeks and mean time to complete radiological union was 12.7 weeks. Return to play at 8 weeks or less resulted in a higher risk of delayed radiological union (24% at 3 months), but this neither prevented the athlete from continuing to play football nor did it affect the ultimate risk of non-union (3% overall). A re-fracture occurred in 1 patient (3%) at 10 months who previously had complete radiographic union at 9 weeks.

Intramedullary screw fixation of 5th metatarsal stress fractures leads to a predictable time of return to play and a low rate of non-union. If players return to play at 8 weeks or less a persistent line may be expected in up to a quarter of patients. However, if asymptomatic this radiological finding does not mean that athletes must avoid playing football as ultimately a good outcome is expected with low rates of non-union and refracture. 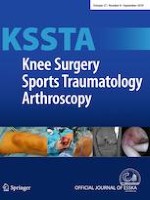 Bicruciate lesion biomechanics, Part 1—Diagnosis: translations over 15 mm at 90° of knee flexion are indicative of a complete tear

A proposal for a new classification of pes anserinus morphology