The SF-12 Physical and Mental Component Summary Scales were used to measure health-related quality of life (HRQoL), and the Eating Disorders Examination Questionnaire (EDE-Q) was used to quantify eating disorder behaviors and cognitions. These self-report forms were completed by undergraduate men and women (n = 709). 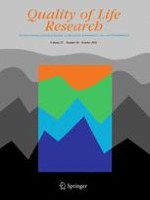 Comprehending the impact of low vision on the lives of children and adolescents: a qualitative approach