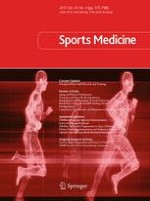 How to Prevent Injuries in Alpine Ski Racing: What Do We Know and Where Do We Go from Here?

Systematic Review of Childhood Sedentary Behavior Questionnaires: What do We Know and What is Next?

The Effect of Dietary Nitrate Supplementation on Endurance Exercise Performance in Healthy Adults: A Systematic Review and Meta-Analysis

The Sticking Point in the Bench Press, the Squat, and the Deadlift: Similarities and Differences, and Their Significance for Research and Practice

The Optimal Load for Maximal Power Production During Upper-Body Resistance Exercises: A Meta-Analysis