Eccrine porocarcinoma is a rare and potentially fatal malignant adnexal tumor that can arise de novo or develop from its benign precursor, poroma. Diagnosis is difficult due to its rarity and resemblance to many other (benign) skin tumors. We present the case of a 71-year-old woman presenting with a long-standing case of eccrine porocarcinoma on the scalp. After multiple incomplete excisions over the last 15 years, no metastases were found. Major reconstructive surgery was necessary after complete excision of the lesion. Complete removal of the eccrine porocarcinoma was achieved in 2 stages. The defect was closed with a large rotation flap of the scalp. No adjuvant radio- or chemotherapy was given. Twenty-one months later, the patient presented with a rapidly growing lymph node recurrence, which was treated by lymph node dissection followed by chemoradiation. This case demonstrates the consequences of suboptimal surgical treatments and follow-up of eccrine porocarcinoma and its benign precursor, poroma. Early recognition, proper pathological diagnosis, and adequate surgical treatment are highly recommended in order to obtain a good prognostic outcome.
Level of evidence: Level V, Risk/Prognostic study. 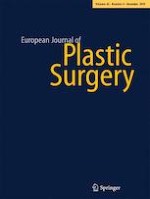 An approach to lipedema: a literature review of current knowledge of an underestimated health problem

Surgical outcome of the patient with open proximal phalangeal fracture with bone defect due to dog bite injury treated with vascularized bone graft: a case report