Aconitum kiyomiense Kadota (Ranunculaceae) is endemic to Takayama city, Gifu Prefecture, central Japan. We collected specimens from marshes and flood plains at altitudes ranging from 852 to 1085 m and from a new habitat consisting of a mesic meadow in the subalpine belt (1681 m). Glabrous pedicels and flowering sequence of inflorescence were used for identification, but intra-species variations in the pilus of pedicels (glabrous, pilose, and chimeric types) were observed. Although the flowering sequence has been reported as both indeterminate and determinate, all specimens in the present study were determinate. No intra-species variation was detected via partial nuclear internal transcribed space, and sequences did not match another 17 East Eurasian continent subgenus Aconitum species. The chloroplast trnL–trnF intergenic spacer region (trnL–trnF) showed three different haplotypes. The trnL–trnF dominant haplotype sequence was identical to that of A. kusnezoffii growing on the Eurasian continent, suggesting that A. kiyomiense is more primitive than other Japanese aconitum and a relic species of the Eurasian continent. We report the first detection of aconitine alkaloids in the tuberous roots, which exhibited aconitine alkaloid contents varying from 0.32 to 4.05 mg/g dry weight (mg/g) for aconitine, 0.02 to 4.12 mg/g for hypaconitine, undetectable to 0.05 mg/g for jesaconitine, and 0.42 to 3.76 mg/g for mesaconitine. The variation of aconitine alkaloid components and contents appeared to be random and did not vary with inflorescence phenotype, trnL–trnF haplotype, environmental habitat conditions, or the geographic region of the collection sites. Since most populations showed no genetic intra-variation, it will be necessary to maintain the continuity of habitats and designate areas for conservation of genetic diversity at the population level. 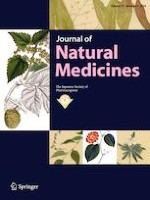 Sesquiterpenes with new carbon skeletons from the basidiomycete Phlebia tremellosa

Correction to: Impact of different post-harvest processing methods on the chemical compositions of peony root