Micafungin was reported to be non-inferior to liposomal amphotericin B (LAmB) in treating patients with candidaemia and invasive candidiasis (IC). The current study aimed to evaluate the economic impact of using micafungin versus LAmB for treatment of candidaemia and IC in Turkey. A decision analytic model, which depicted economic consequences upon administration of micafungin or LAmB for treating patients with candidaemia and IC in the Turkish hospitals, was constructed. Patients were switched to an alternative antifungal agent if initial treatment failed due to mycological persistence. All patients were followed up until treatment success or death. Outcome probabilities were obtained from published literature and cost inputs were derived from the latest Turkish resources. Expert panels were used to estimate data that were not available in the literature. Cost per patient treated for each intervention was then calculated. Sensitivity analyses including Monte Carlo simulation were performed. For treatment of candidaemia and IC, micafungin (€4809) was associated with higher total cost than LAmB (€4467), with an additional cost of €341 per treated patient. Cost of initial antifungal treatment was the major cost driver for both comparators. The model outcome was robust over a wide variation in input variables except for drug acquisition cost and duration of initial antifungal treatment with micafungin or LAmB. LAmB is cost-saving relative to micafungin for the treatment of candidaemia and IC from the Turkish hospital perspective, with variation in drug acquisition cost of the critical factor affecting the model outcome. 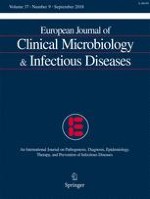 Correction to: Attitudes of physicians from 10 European countries on adherence and how treatment modalities in ABSSSI affect adherence: results from a Delphi survey