Dense-deposit disease (DDD) is a rare glomerulopathy characterized by electron-dense deposits in the glomerular basement membrane. About 50 % of patients with DDD progress to end-stage kidney disease and require dialysis within 10 years of diagnosis, and the disease often recurs after renal transplantation.

We describe a 14-year-old girl with recurrent DDD in her transplanted kidney. Clinical onset was at 8 years of age, when steroid-resistant nephrotic syndrome was diagnosed with microhematuria, severe hypocomplementemia and normal kidney function. Although remission was initially observed after several plasma exchanges, nephrotic proteinuria returned and kidney function further declined 1 year later. The patient received a living-related kidney transplant. Initial allograft function was good, but proteinuria reappeared 3 months after transplantation, accompanied by a slight deterioration in kidney function. After histological confirmation of DDD recurrence and subsequent management with plasmapheresis, the patient was treated for 30 months with eculizumab, a humanized monoclonal antibody that binds to C5 complement protein. This intervention proved effective and resulted in complement inhibition, sustained remission of proteinuria and preservation of renal function. A graft biopsy 6 months later showed no progression of the renal lesions.

Early clinical and histological recurrence of DDD in the transplanted kidney in this 14-year-old patient was treated for 30 months with eculizumab. The patient remains asymptomatic, has no proteinuria and her kidney function is intact. 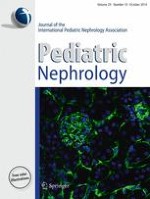 An infant with recurrent convulsive seizures of 3 weeks duration: Questions

Effect of CYP3A5 genotype, steroids, and azoles on tacrolimus in a pediatric renal transplant population