This prospective single-center pilot study was performed to evaluate the effects of additional treatment with canagliflozin on left ventricular function in T2DM. Between July 2017 and December 2017, 38 diabetic patients who had inadequately controlled T2DM were consecutively recruited from outpatients at Tsuruoka Kyoritsu Hospital, Yamagata, Japan. All participants were evaluated at baseline and at 3 months after beginning additional treatment with canagliflozin. During the 6 months before the start of this study and the 3 months after the start of this study, participants had not changed their use of antidiabetic drugs or any other drugs that could affect glucose metabolism such as renin–angiotensin–aldosterone system (RAAS) inhibitors (angiotensin-converting enzyme inhibitors and/or angiotensin receptor blockers), beta blockers, diuretics, and statins. The inclusion criteria were as follows: (1) T2DM with HbA1c (NGSP) of ≥ 7.0%, < 10.5% and (2) experiencing no changes in antidiabetic drugs or any other drugs during the 6 months prior to the start of this study. Inclusion criteria also included (3) satisfaction of either (a) or (b) as follows: (a) age ≥ 45 and < 75 years without a history of CVD and with ≥ 2 of the following risk factors determined at the screening visit: duration of T2DM ≥ 10 years, systolic blood pressure (SBP) ≥ 140 mmHg (average of 3 readings at screening visit), taking at least one anti-hypertensive agent, current daily cigarette smoker (Brinkmann index ≥ 200), microalbuminuria or macroalbuminuria (microalbuminuria: urinary albumin excretion from 30 to 300 mg/g Cr; macroalbuminuria: urinary albumin excretion of ≥ 300 mg/g Cr); dyslipidemia (abnormal values for ≥ 1 among high-density lipoprotein [HDL] cholesterol < 40 mg/dL, low-density lipoprotein (LDL) cholesterol ≥ 120 mg/dL, and/or triglycerides (TG) ≥ 150 mg/dL); carotid intima media thickness ≥ 1.1 mm, and plaque positive; or (b) age ≥ 35 and < 75 years with a history of ≥ 1 of the following indicating CVD: old cerebral infarction, old myocardial infarction, hospital admission for unstable angina, chronic heart failure, coronary artery bypass graft, percutaneous coronary intervention (with or without stenting), peripheral revascularization (angioplasty or surgery), symptomatic with documented hemodynamically significant carotid or peripheral vascular disease, or amputation secondary to vascular disease. Patients were excluded based on: (1) age < 35 years or ≥ 75 years; (2) taking antipsychotics; (3) arrhythmia; (4) severe renal dysfunction (serum Cr ≥ 2.5 mg/dL); (5) severe liver dysfunction (3× upper limit of normal); (6) diabetic ketosis or diabetic coma; (7) insulin-dependent diabetes mellitus; (8) malignancy, or (9) acute heart failure or acute myocardial infarction. All participants underwent blood tests, including those for fasting plasma glucose, HbA1c, estimated glomerular filtration rate (eGFR), HDL cholesterol, LDL cholesterol, TG, brain natriuretic peptide (BNP), hemoglobin (Hb), and hematocrit (Hct). Clinical data (duration of diabetes; body mass index [BMI]; SBP; diastolic blood pressure [DBP]; heart rate [HR]; history of CVD; insulin therapy; and use of oral anti-diabetic drugs, anti-hypertensive agents, and lipid-lowering agents) were obtained from medical records and a questionnaire.
Thirty-seven patients were included in the analysis after excluding 1 with arrhythmias.
The study protocol was approved by the ethics committee of Tsuruoka Kyoritsu Hospital (approval number: 2017-01; date: 7th June, 2017), and the study was conducted according to the principles of the Helsinki Declaration II. This study was registered at the UMIN Clinical Trial Registry (UMIN000028141). All patients were informed of the purpose of the study after which consent was obtained.
Anzeige

Using the spontaneous sequence method, the beat-to-beat BP was measured for 15 min after 15 min of supine rest as the slope of the relationship between spontaneous changes in SBP and the pulse interval. Measurement was made using the second and third fingers of the right hand by the vascular unloading technique (Task Force Monitor, CNSystems, Graz, Austria). For calculation of BRS, the relative changes in SBP (mmHg) and the R–R interval (msec), which is expressed as the distance between corresponding QRS complexes, were considered according to the sequence method with cut-off points of 1 mmHg and 3 ms, respectively [ 22].

Because there has been no report on the effect of SGLT-2 inhibitors to improve the septal E/e′, we used information from a previous report on the effect of another drug on the septal E/e′ (approximately a 1.5 reduction) to estimate the required sample size [ 12]. Sample size estimates were based on the following: standard deviation, 3; α-level, 0.05; and power, 80%. Sample size was estimated to be 33 people. Assuming a dropout rate of 10%, the target number of patients was therefore set at 38 patients.
Data analyses were performed using the Statistical Package for the Social Sciences 22.0 software (IBM, Armonk, NY, USA). Patients’ characteristics and results are presented as mean ± SD, mean ± standard error, or median with interquartile range (IQR) as appropriate according to the data distribution. Comparison of variables between baseline and 3 months after treatment were made using the paired t test or Wilcoxon signed-rank test (Table  2). Pearson’s correlation analysis or Spearman’s rank correlation coefficient test was used for single correlations (Table  3). Multiple-linear regression was used to assess individual and cumulative effects of ΔHb, age, sex, SBP, eGFR, and HR on the Δseptal E/e′ ratio. Independent variables were selected among variables that were significantly correlated with the Δseptal E/e′ ratio (Table  4). The delta (∆) values for BRS and LF/HF were calculated according to values at 3 months after treatment-value at baseline. All other delta values were calculated as [(value at 3 months after treatment-value at baseline) × 100]/value at baseline (%). As shown in Fig.  2 and Table  5, the baseline septal E/e′ ratio was divided into tertiles (T1 < 12, T2 ≥ 12- < 16, T3 ≥ 16). The Jonckheere trend test was used to test for linear trends in Δseptal E/e′ ratio in relation to baseline septal E/e′ ratio tertiles. The analysis of variance (ANOVA) was used to compare Δseptal E/e′ ratios among participants with various baseline septal E/e′ ratio tertiles. In ANOVA, the Tukey post hoc test was also used to compare Δseptal E/e′ ratios among different baseline septal E/e′ ratio groups. As shown in Table  6, the effects of canagliflozin on Δseptal E/e′ ratios were analyzed for the following subgroups: sex, history of hypertension, presence of CVD, insulin use, sulfonylurea use, metformin use, DPP-4 inhibitor use, calcium channel blocker use, RAAS inhibitor use, beta blocker use, and diuretic use. In the subgroup analysis, mean Δseptal E/e′ was compared using Student’s t test. Hypertension was defined as follows: SBP ≥ 140 mmHg, DBP ≥ 90 mmHg and/or the use of at least one anti-hypertensive agent. CVD was considered to be present if any of the following had occurred: cerebral infarction, myocardial infarction, hospital admission for unstable angina, heart failure, coronary artery bypass graft, percutaneous coronary intervention (with or without stenting), peripheral revascularization (angioplasty or surgery), symptoms consistent with documented hemodynamically significant carotid or peripheral vascular disease, and/or amputation secondary to vascular disease. As shown in Additional file 1: Table S1, participants were divided into a primary prevention group without a history of CVD, a secondary prevention group with a history of CVD, and an overall population group. In each group, comparison of variables between baseline and 3 months after treatment were made using the paired t test. The Student’s t test was used to compare mean Δseptal E/e′ in the primary prevention group and secondary prevention group. A p value < 0.05 was considered significant.

Comparison of values from baseline to after 3 months

Univariate correlates of changes in the septal E/e′ ratio

Multivariate analysis of changes in the septal E/e′ ratio

The septal E/e′ ratio was significantly improved in patients using sulfonylurea ( p = 0.006) or a DPP-4 inhibitor ( p = 0.014) at baseline. However, there was no significant difference in patients grouped according to sex, history of hypertension, presence of CVD, insulin use, metformin use, calcium channel blocker use, RAAS inhibitor use, beta blocker use, and diuretic use (Table  6).
Table 6
Effects of canagliflozin on the septal E/e′ ratio in subgroups of study patients
Values are mean ± SE or no. (%)
DPP dipeptidyl peptidase-4; RAAS renin–angiotensin–aldosterone system
Anzeige

DM and MS contributed to the study design, data acquisition, and data analysis and wrote the manuscript. YK, NT, RH, and KU reviewed and edited the intellectual content. The funder had no role in study design, analysis, interpretation of data, writing of the manuscript, and the decision to submit the manuscript for publication. All authors read and approved the final manuscript.

We thank Mariko Suzuki, Maki Okuyama, and Mio Yonaiyama for her work on this study.

The study protocol was approved by the local ethics committee, and the study was conducted according to the principles of the Helsinki Declaration II. All patients were informed of the purpose of the study after which consent was obtained.

No specific funding was received for the study. 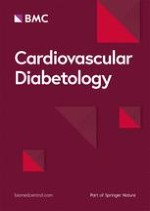 Effect of sitagliptin on tissue characteristics of the carotid wall in patients with type 2 diabetes: a post hoc sub-analysis of the sitagliptin preventive study of intima-media thickness evaluation (SPIKE)

Unrecognised cardiovascular disease in type 2 diabetes: is it time to act earlier?