Ventral hernia repair (VHR) is a commonly performed operation, but analysis of patient outcomes based upon hernia size is lacking. We sought to identify differences in operative repair and post-operative morbidity and mortality after open VHR based on hernia defect size.

Patient and operative data were retrospectively reviewed on all patients undergoing open incisional VHR between January 2008 and February 2015 by a single surgeon at the Johns Hopkins Hospital. Patient variables were described by means for continuous variables and percentages for discrete variables, with differences between groups calculated by Chi-squared analysis.

Hernia defect size affects operative time and surgical technique for repair of a ventral hernia. Larger defect size is associated with increased post-operative morbidity and length of stay but not readmission, recurrence, or mortality. Hernia size greater than 400 cm2 should not be a limitation to operative repair. 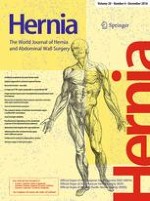 The increased cost of ventral hernia recurrence: a cost analysis

PIPOM or the need of a new acronym