Despite the fact that high-dose radiotherapy is a main therapeutic modality in cancer treatment, recent evidence suggests that it might confer radioresistance. Hyper-radiosensitivity (HRS) is one of the important biological effects of low-dose ionizing radiation (LDIR) in mammalian cell lines. LDIR is considered as a promising assistant method of clinical cancer therapy. The purpose of this study was to evaluate the efficiency of intermittent LDIR followed by a high-dose radiation therapeutic approach compared with the conventional high-dose radiotherapy in the breast cancer MDA-MB-231 cell line.

MTT and flow cytometry assay were used for cell proliferation and apoptosis after 24 h of the last irradiation dose (2 Gy). Also, we examined p21 and cespase3 gene expression by RT-qPCR. We observed that intermittent LDIR significantly increased the killing effect of radiotherapy (viability, 71.95 + 1.25%) (P < 0.01). The apoptosis is proposed to increase up to 32.55 + 0.07% in the intermittent LDIR that was markedly higher than those of other groups (P < 0.01). Caspase3 gene expression in this group was the highest (5.2-fold), 4.26-fold and 1.42-fold in single LDIR and HDIR, respectively. It was observed that the intermittent LDIR potentially decreases p21 expression in comparison with the challenge dose of 2 Gy (0.681-fold).

LDIR may result in HRS through a concurrent increase of apoptosis and a significant decrease in cell viability. The therapeutic effects of this approach should be further investigated in animal models. 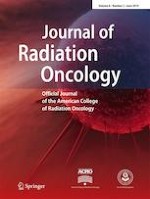 THE PROCEEDINGS OF THE RADIATION ONCOLOGY SUMMIT: ACRO 2019

Correction to: Stereotactic body radiation therapy for non-small cell lung cancer patients with prior history of thoracic surgery and/or radiation therapy: the influence of smoking, size, and central location on risk of complications