Clinical role of low-dose aspirin (LDA) in pathogenesis of gastroesophageal reflux disease is by far controversial. This can be attributed to the paucity of basic research detailing the mechanism of LDA-induced esophageal mucosal injury (EI) on underlying chronic acid reflux esophagitis (RE).

The aim of this study was to clarify the effect of LDA on chronic RE in rats.

Esophagitis was induced in 8-week-old male Wistar rats by ligating the border between forestomach and glandular portion with a 2–0 silk tie and covering the duodenum with a small piece of 18-Fr Nélaton catheter. Seventy-eight chronic RE rat models were divided into five treatment groups, consisting of orally administered vehicle (controls), and aspirin doses of 2, 5, 50 or 100 mg/kg once daily for 28 days. EI was assessed by gross area of macroscopic mucosal injury, severity grade of esophagitis and microscopic depth of infiltration by inflammatory cells.

Maximal dose aspirin (100 mg/kg/day) contributed in exacerbating preexisting EI. LDA (2 and 5 mg/kg/day), on the other hand, did not affect chronic RE in this model. LDA seems to be safe for use in patients with chronic RE. 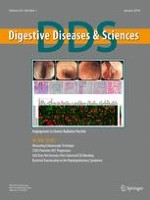 Gender-Based Differences in a Population-Based Cohort with Celiac Disease: More Alike than Unalike

Vitamin D3 Versus Gliadin: A Battle to the Last Tight Junction