This study aimed to quantify the clinical parameters of mono- and bipolar instruments that inhibit pacemaker function. The specific aims were to quantify pacer inhibition resulting from the monopolar instrument by altering the generator power setting, the generator mode, the distance between the active electrode and the pacemaker, and the location of the dispersive electrode.

A transvenous ventricular lead pacemaker overdrive paced the native heart rate of an anesthetized pig. The primary outcome variable was pacer inhibition quantified as the number of beats dropped by the pacemaker during 5 s of monopolar active electrode activation.

Clinical parameters that reduce the inhibition of a pacemaker by monopolar instruments include lowering the generator power setting, using cut (vs coagulation) mode, and locating the dispersive electrode so the current vector does not traverse the pacemaker generator or leads. 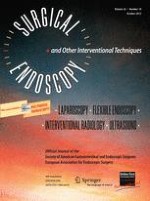 Effectiveness of electrothermal bipolar vessel-sealing devices versus other electrothermal and ultrasonic devices for abdominal surgical hemostasis: a systematic review