Effect of Single Nucleotide Polymorphisms in the Xenobiotic-sensing Receptors NR1I2 and NR1I3 on the Pharmacokinetics and Toxicity of Irinotecan in Colorectal Cancer Patients | springermedizin.de Skip to main content
TOOLBAR 1 2 3 4
SUCHE MENÜ 1 2 3 4

Nuclear receptors PXR (pregnane X receptor, NR1I2) and CAR (constitutive androstane receptor, NR1I3) are key regulators of irinotecan metabolism, and ligand-dependent modulation of their activity leads to significant drug–drug interactions. Because genetic polymorphisms can also affect the activity of these xenobiotic-sensing receptors, we hypothesized that they could contribute to the interpatient variability of irinotecan pharmacokinetics and to the toxicity of irinotecan-based regimens.

In a cohort of 109 metastatic colorectal cancer patients treated with irinotecan (180 mg/m2) in combination with other drugs, associations were assessed between 21 selected single nucleotide polymorphisms of NR1I2 or NR1I3 and pharmacokinetic parameters or toxicity of irinotecan and its metabolites.

Our results reveal for the first time the involvement of NR1I2 in the pharmacogenetics of irinotecan and suggest that it may help to predict the toxicity of low-dose irinotecan. 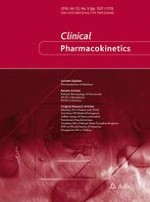 Dose- and Formulation-Dependent Non-Linear Pharmacokinetic Model of Paritaprevir, a Protease Inhibitor for the Treatment of Hepatitis C Virus Infection: Combined Analysis from 12 Phase I Studies

Effects of Food and Pharmaceutical Formulation on Desmopressin Pharmacokinetics in Children

Ketamine: A Review of Clinical Pharmacokinetics and Pharmacodynamics in Anesthesia and Pain Therapy

Lack of Effect of Vortioxetine on the Pharmacokinetics and Pharmacodynamics of Ethanol, Diazepam, and Lithium

Population Pharmacokinetics of Edoxaban in Patients with Non-Valvular Atrial Fibrillation in the ENGAGE AF-TIMI 48 Study, a Phase III Clinical Trial