Most submucosal tumors (SMTs) in the esophagogastric junction (EGJ) are irregularly shaped and different from those in the esophagus, where submucosal tunneling endoscopic resection (STER) has been proven effective and safe. However, few reports paid attention to STER for SMTs in the EGJ. The aim of the study was not only to evaluate the effect of STER in patients with SMTs in the EGJ but to analyze the risk factors for failure of en bloc resection.

A consecutive of 47 patients with SMTs originating from the muscularis propria (MP) layer in the EGJ underwent STER were retrospectively included between September 2012 and December 2016. Thirty-five tumors underwent en bloc resection, and the other 12 tumors received piecemeal resection. The tumor size, operation time, en bloc resection rate, complications, residual, and local recurrence were achieved and compared between the two groups.

STER is an effective and safe technique for the treatment of SMTs arising from the MP layer in the EGJ. Irregular shape and tumor diameter ≥20 mm are the reliable risk factors for en bloc resection failure.
Anzeige 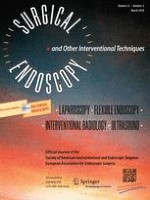 Erratum to: First human use of hybrid synthetic/biologic mesh in ventral hernia repair: a multicenter trial