This study was performed to investigate the effect of surgical repair of acquired buried penis on sexual function in adults and provide a reference for clinical treatment.

Thirty-two adult patients who underwent surgical treatment of buried penis from August 2010 to August 2017 were selected as the study group. The basic operative method was penile lengthening. Suprapubic liposuction, suspensory ligament release, and preputial plasty were performed according to the clinical manifestations. The changes in erectile function, orgasmic function, sexual desire, intercourse satisfaction, and overall satisfaction sexual function were evaluated according to the International Index of Erectile Function (IIEF) before and after treatment. 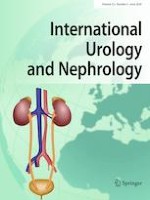 The efficacy of rituximab in the treatment of refractory nephrotic syndrome: a meta-analysis

The theoretical method and clinical application of testicular torsion

Kidney biopsy in patients after liver transplantation: an underutilized, but clinically important procedure

Effect of mirtazapine on pruritus in patients on hemodialysis: a cross-over pilot study