main-content
nach oben
Zurück zum Suchergebnis
​
print
PDF-Version jetzt herunterladen
​
download
Inhaltsverzeichnis
​
insite
Ausgabenarchiv
​
archive
​
insite
Drucken
​
print
» Zur Zusammenfassung PDF-Version jetzt herunterladen
In this entry, we examine a statistical measure commonly cited in educational research, effect sizes: what they are, when they are needed, and challenges with their interpretation. While effect sizes are encountered in many research articles in medical education, it is often not really clear why they are reported and what they mean in the context of the study. We argue that effect sizes are useful only if a research question calls for them. They should be presented along with the statistics they are calculated from, and should be reported with confidence intervals when generalizing study findings to a broader population.

In order to understand the idea of effect sizes, we need to understand the problem of different scales. In educational research, we are often concerned with differences obtained on different scales in questionnaires and assessments, such as exams with different numbers of questions in different empirical studies. In contrast to a variable such as temperature, where a difference of 18 °F corresponds with a difference of 10 °C, the aforementioned 5 points of difference in exam score on a scale from 0 to 80 does not necessarily correspond with 10 points of difference in exam score on a scale that ranges from 0 to 160. Different exams may have questions of different difficulty, while a longer exam may include additional aspects of difficulty, such as stamina and speed.

What are effect sizes?

Effect sizes, like other statistics, fluctuate from study to study

Confidence intervals that include the value ‘0’

Meaningful interpretation of an effect size 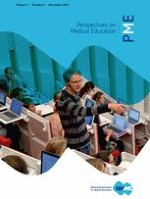 Navigating the unchartable: paths to promotion and tenure in health professions education

Erratum to: Student-directed retrieval practice is a predictor of medical licensing examination performance

What is science without replication?