Educational outreach visits are meant to improve the practice of health professionals by promoting face-to-face visits to deliver educational contents. They have been shown to change prescription behavior, but long-term effects are still uncertain. This trial aimed to determine if they improve family physician prescribing compared with passive guideline dissemination.

Parallel, open, superiority, and cluster-randomized trial. National Health Service primary care practices (clusters) were recruited in the Lisbon region—Portugal between March 2013 and January 2014. They could enter if they had at least four family physicians willing to participate and not planning to retire in the follow-up period. Three national guidelines were chosen for dissemination: acid secretion modifiers, non-steroidal anti-inflammatory drugs, and antiplatelets. Physicians in the intervention group received one 15 to 20 min educational outreach visit at their workplace for each guideline. Physicians in the control group had access to guidelines through the Directorate-General for Health’s website (passive dissemination). Primary outcomes were the proportion of COX-2 inhibitors prescribed within the NSAID class and the proportion of omeprazole within the PPI class at 18 months after the intervention. A cost-benefit analysis was performed. Practices were randomized by minimization. Data analyses were done at individual physician level using generalized mixed-effects regression models. Participants could not be blinded.

Educational outreach visits were unsuccessful in improving compliance with guideline recommendations among Portuguese family physicians. No effects were observed at 1, 6, and 18 months after the intervention, and there were no associated cost savings. 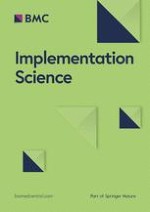 To what extent can behaviour change techniques be identified within an adaptable implementation package for primary care? A prospective directed content analysis

Application of the COM-B model to barriers and facilitators to chlamydia testing in general practice for young people and primary care practitioners: a systematic review

A group-based lifestyle intervention for diabetes prevention in low- and middle-income country: implementation evaluation of the Kerala Diabetes Prevention Program