Postoperative chylothorax after esophagectomy occurs relatively infrequently, in about 2–9% of patients [ 1– 3]. Management of postoperative chylothorax generally involves nutritional regimens as well as pharmacological and surgical therapies, but a clear consensus has yet to be reached [ 4]. Previous reports have noted the difficulty of using only medical management consisting of a nutritional regimen, etilefrine, octreotide, and picibanil (OK-432) for patients who have undergone thoracic duct resection, and that these therapies for chylothorax were indicated only for those patients in whom the thoracic duct was preserved [ 5– 8]. However, if these therapies could be successful even in cases of thoracic duct resection, medical management alone would be advantageous because the patient would not need to undergo reoperation which might be associated with complications. In addition, it may be difficult to identify the site of leakage during surgery.
In this study, we investigated the usefulness of an etilefrine regimen to broaden the medical treatment options for postoperative chylothorax after esophagectomy with resection of the thoracic duct.
Anzeige

This single-center retrospective study was conducted to evaluate the effectiveness of therapy with an etilefrine regimen for chylothorax after esophagectomy. A total of 371 consecutive patients with esophageal cancer were identified from a prospectively constructed database at the Department of Gastroenterological Surgery, Toranomon Hospital between January 2011 and February 2017. They were patients with squamous cell carcinoma or adenocarcinoma of the esophagus including Siewert type I, II tumor of the esophagogastric junction who underwent subtotal esophagectomy. Of these 371 patients, 19 patients who were diagnosed with chylothorax as a postoperative complication were enrolled in this study. We investigated the clinical effectiveness of etilefrine for the management of postoperative chylothorax following esophagectomy particularly among patients with resection of the thoracic duct. Disease was staged according to the UICC TNM grading system, 7th edition [ 9]. We graded all postoperative complications based on the Clavien–Dindo classification [ 10], and grade ≥2 events were documented as complications. This study was conducted with approval from the Institutional Review Board of Toranomon Hospital.

We perform esophagectomy with 2- or 3-field lymph node dissection depending on the degree of progression and surgical risk involved. The operative thoracic approach is by video-assisted thoracoscopic surgery or thoracotomy, and the abdominal approach is hand-assisted laparoscopic surgery or open laparotomy depending on individual cases. The thoracoscopic approach involves insertion of 5- or 12-mm ports through the second and fourth intercostal spaces on the anterior axillary line (assistant’s ports) and 11-mm ports through the fifth intercostal space at the mid-axillary line (camera port) and in the fourth (5 mm) and sixth (11 mm) intercostal spaces on the posterior axillary line (operator’s ports). We preserved the thoracic duct in cases with clinical stage (cStage) I and performed resection in cases with cStage ≥II based on the UICC TNM grading system, 7th edition [ 9]. The reconstruction technique was either gastric tube reconstruction, or ileocolon reconstruction.

Generally, postoperative chylothorax is managed either conservatively or surgically. The protocol followed in our hospital and in this study involves the application of a nutritional approach first, with patients receiving total parenteral nutrition. They are started on octreotide (300 μg/day) by continuous subcutaneous infusion and/or etilefrine (120 mg/day) by intravenous injection concurrently. If there is progressive resolution of the chylous pleural effusion with this treatment, and the effluent is approximately less than 50–100 mL/day, we perform pleurodesis with OK-432. After that, the patient made satisfactory progress and resumed oral food intake. If the effluent keep approximately less than 50–100 mL/day after the oral food intake started, the thoracotomy tube was removed. If conservative treatment fails (ex. in the presence of excessive (>400–500 mL/day) chest drain output), we then consider more invasive treatment such as lymphangiography, thoracic duct embolization, or thoracic duct ligation.
Anzeige

All analyses were performed using the Statistical Package for the Social Sciences (SPSS) software version 19.0J for Windows (SPSS Inc., Chicago, IL). Pearson’s Chi-squared test, Fisher’s exact test, or the Mann–Whitney U test was used for intergroup comparisons, as appropriate. Statistical significance was set at p < 0.05.

Table  1 shows the background characteristics and surgical findings of 16 patients in whom cure was achieved after conservative treatment with ( n = 11) and without ( n = 5) adjuvant etilefrine treatment (see Fig.  1). Among patient background characteristics and intraoperative findings, no significant difference was found between age, sex, body mass index, clinical stage, tumor localization, extent of lymph node dissection, operative approach, resection/preservation of the thoracic duct, organ reconstruction, duration of the operation, or blood loss. The duration of chylothorax tended to be longer in the no-etilefrine group than in the etilefrine group, but no significant difference between the two groups (27.8 vs. 11.6 days, respectively; p = 0.078).
Table 1
Clinicopathological characteristics of the 16 patients in whom conservative cure of chylothorax was achieved
All figures followed by parentheses indicate a range unless otherwise stated

Etilefrine was used in 12 of 14 patients with post-TDR chylothorax. Among these 12 patients, 3 required surgical treatment and the remaining 9 patients were cured with conservative treatment. The background characteristics of patients had no significant differences between the groups. The duration of chylothorax was shorter in the conservative treatment group than in the surgical treatment group, but no significant difference between the two groups (11.9 vs. 36.3 days, respectively; p = 0.052) (the data not shown).
Table  2 shows detailed information for the 12 patients who developed chylothorax after esophagectomy with TDR. With the use of etilefrine as adjuvant therapy, cure was achieved in 9 patients (75%) without surgical intervention.
Table 2
Characteristics of patients with chylothorax after esophagectomy with thoracic duct resection treated with etilefrine regimen
POD postoperative day

The findings of this study suggest the effectiveness of etilefrine in patients with chylothorax following esophagectomy. The drug was effective even in post-TDR chylothorax, an often intractable condition that is difficult to treat conservatively. However, when the effectiveness of etilefrine regimen is unexpectedly poor, it is important to switch from drug therapy to surgical treatment in the early stage of this complication.

All the patients of the Toranomon hospital provided written informed consent for surgery and for the possibility of their specimens to be used in future medical studies as long as their privacy was protected. The present study was also conducted in accordance with the Declaration of Helsinki (1964) and later versions and Good Clinical Practice guidelines and with the approval of the Institutional Review Boards of Toranomon hospital.

None declared.
Open AccessThis article is distributed under the terms of the Creative Commons Attribution 4.0 International License ( http://​creativecommons.​org/​licenses/​by/​4.​0/​), which permits unrestricted use, distribution, and reproduction in any medium, provided you give appropriate credit to the original author(s) and the source, provide a link to the Creative Commons license, and indicate if changes were made. 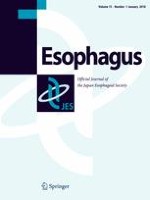 Use of endoscopic balloon dilation for benign esophageal stenosis in children: our 11 year experience