The International Society on Thrombosis and Haemostasis recommends avoiding the use of direct oral anticoagulants (DOACs) in patients with a body mass index (BMI) greater than 40 kg/m2 or weight greater than 120 kg.

Higher BMI is associated with altered pharmacokinetics which may affect the safety and effectiveness for DOACs.

Data were collected on 3458 patients taking a DOAC prior to admission to a Midwestern health system between February 2013 and August 2016. Of these, 43 patients had a thrombotic event and 70 patients had an overt bleeding event. Patients were stratified among the following three BMI groups: BMI < 30 kg/m2, BMI 30–40 kg/m2, and BMI > 40 kg/m2.

Among patients admitted to a single health system on DOAC therapy over a three-and-a-half-year period, obesity did not significantly correlate with thrombotic or overt bleeding complications. This study is limited as a single health system study with low overall event rates. A preliminary finding of this study showed a trend towards decreased bleeding frequency as BMI increased. 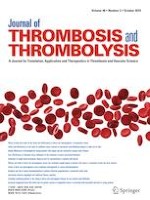 Dual versus triple therapy for patients with atrial fibrillation and acute coronary syndrome: a meta-analysis and trial sequential analysis of randomized controlled trials

The use of direct oral anticoagulants for extended duration thromboprophylaxis in medically ill patients: a systematic review and meta-analysis