The initial distribution volume of glucose (IDVG) has been reported to be a surrogate marker of cardiac preload. However, the relationship between cardiac output and IDVG is not fully understood. We investigated the effects of cardiac output on IDVG in the absence of fluid gain or loss in pigs.

Thirteen pigs were anesthetized and allocated to either the modified cardiac output group (m-CO group, n = 10) or the control group (control group, n = 3). In the m-CO group, CO was sequentially modulated from high CO (high CO) to two grades of low CO (low CO-1 and low CO-2) with dobutamine and propranolol with lidocaine, respectively, in the absence of any apparent change in basal fluid volume status. Thermodilutional CO and IDVG were measured at each CO condition. The IDVG was measured according to a one-compartment model with 2 g glucose. The same parameters were measured in the control group using the same time schedule as for the m-CO group but without inotropes and at a stable CO state. Thereafter, 250 ml of 10% dextran were infused over 15 min to compare the effects of a preload-dependent increase in CO on IDVG measurements to the effects of the pharmacological modification of CO. Data were expressed as the mean ± SD. Statistical analysis was performed with repeated measures ANOVA followed by Dunnett’s test. Pearson’s correlation test was also used. A P value of <0.05 was considered to indicate statistical significance.

This study suggests that the IDVG is dependent on the central extracellular fluid volume and not on cardiac output. 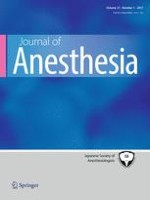 Assessing interaction between dexmedetomidine and propofol

Fosaprepitant versus droperidol for prevention of PONV in craniotomy: a randomized double-blind study