Two hundred and fifty-six patients with normal myocardial perfusion were enrolled in this study. CKD was defined as estimated glomerular filtration rate (eGFR) <60 ml/min/1.73 m2. Patients with eGFR ≥ 60 ml/min/1.73 m2 were assigned to a control group. The mean myocardial WR of Tl-201 was calculated from the stress and the redistribution Bull’s eye maps.

Our data suggest that CKD is associated with increased myocardial WR of Tl-201 in patients with normal perfusion on SPECT. 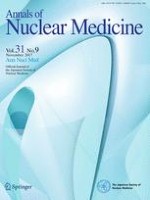 Prediction of outcome in pediatric Hodgkin lymphoma based on interpretation of 18FDG-PET/CT according to ΔSUVmax, Deauville 5-point scale and IHP criteria