Low back pain (LBP) is often accompanied by changes in gait, such as a decreased (preferred) walking velocity. Previous studies have shown that LBP diminishes the normal velocity-induced transverse counter-rotation between thorax and pelvis, and that it globally affects mean erector spinae (ES) activity. The exact nature and causation of these effects, however, are not well understood. The aim of the present study was to examine in detail the effect of walking velocity on global trunk coordination and ES activity as well as their variability to gain further insights into the effects of non-specific LBP on gait. The study included 19 individuals with non-specific LBP and 14 healthy controls. Gait kinematics and ES activity were recorded during treadmill walking at (1) a self-selected (comfortable) velocity, and (2) sequentially increased velocities from 1.4 up to maximally 7.0 km/h. Pain intensity, fear of movement and disability were measured before the experiment. The angular movements of thorax, lumbar and pelvis were recorded in three dimensions. ES activity was recorded with pairs of surface electrodes. Trunk–pelvis coordination and mean amplitude of ES activity were analyzed. In addition, invariant and variant properties of trunk kinematics and ES activity were studied using principal component analysis (PCA). Comfortable walking velocity was significantly lower in the LBP participants. In the transverse plane, the normal velocity-induced change in pelvis–thorax coordination from more in-phase to more antiphase was diminished in the LBP participants, while lumbar and pelvis rotations were more in-phase compared to the control group. In the frontal plane, intersegmental timing was more variable in the LBP than in the control participants, with additional irregular movements of the thorax. Rotational amplitudes were not significantly different between the LBP and control participants. In the LBP participants, the pattern of ES activity was affected in terms of increased (residual) variability, timing deficits, amplitude modifications and frequency changes. The gait of the LBP participants was characterized by a more rigid and less variable kinematic coordination in the transverse plane, and a less tight and more variable coordination in the frontal plane, accompanied by poorly coordinated activity of the lumbar ES. Pain intensity, fear of movement and disability were all unrelated to the observed changes in coordination, suggesting that the observed changes in trunk coordination and ES activity were a direct consequence of LBP per se. Clinically, the results imply that conservative therapy should consider gait training as well as exercises aimed at improving both intersegmental and muscle coordination. 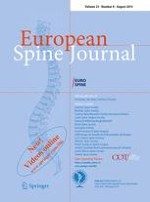 Cerebellar hemorrhage after spinal surgery: case report and review of the literature

Abstracts of the 19th National Congress on Spinal Pathology

Compliance of the L5-S1 spinal unit: a comparative study between an unconstrained and a partially constrained system