Creatine belongs to a buffering system of cellular ATP level and has been reported to display direct antioxidant activity. Aim of this work was to investigate whether creatine treatment could ameliorate the antioxidant response of intestinal cells and limit the oxidative injury induced by anoxia and subsequent reoxygenation.

Jejunal and ileal tracts of rat intestine were everted and incubated in vitro under normoxic, anoxic and reoxygenation conditions in the absence and in the presence of 10 mM creatine. (Na+, K+)-ATPase, γ-GT and antioxidant enzymes activities were determined in mucosal homogenate, as well as malondialdehyde production and HSP70 expression.

The presence of creatine seems to potentiate the defensive response of both tissues, in jejunum by means of cell antioxidant equipment, in ileum by the involvement of HSP70. 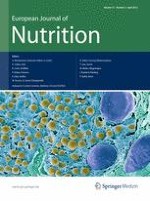 Differential effects of 1α,25-dihydroxycholecalciferol on MCP-1 and adiponectin production in human white adipocytes

The immunomodulatory properties of viable Lactobacillus salivarius ssp. salivarius CECT5713 are not restricted to the large intestine