Effects of DTL electrode position on the amplitude and implicit time of the electroretinogram | springermedizin.de Skip to main content
TOOLBAR 1 2 3 4
SUCHE MENÜ 1 2 3 4

Since the introduction of the Dawson, Trick, and Litzkow (DTL) electrode [ 1], its use in recording electroretinograms (ERGs) has spread. One of the main advantages of the DTL is that it is much more comfortable to wear compared to conventional electrodes, such as contact lens electrodes [ 2– 4].
Originally, the ERG was mainly used for diagnosing retinal diseases such as retinal dystrophies, where the ERG is frequently severely abnormal. However, now that the ERG is increasingly used for monitoring disease, more subtle ERG changes become important. Therefore, one must be aware of factors that may affect the ERG results, other than disease or treatment. Particularly, factors that influence the inter-session variability are important.
Anzeige
Factors that may influence the absolute ERG results, but will have little effect on intersession variability because they do not differ between sessions, include gender [ 5], refraction [ 6], and ocular pigmentation [ 7]. Other factors that can affect the intersession variability may be minimized by always incorporating International Society for Clinical Electrophysiology of Vision (ISCEV) standards. These include duration of dark and light adaptation, flash strengths, and pupil size [ 8]. Besides these, there are factors that also affect the intersession variability but are more difficult to address. These include DTL position [ 9– 12], media opacities [ 13], and age [ 14– 16].
When the DTL electrode was introduced, it was said that its position was “only a little disturbed by blinking” [ 1]. However, since then several reports state that the DTL position can shift, which may significantly affect the recorded amplitudes.
When the DTL is positioned on the cornea, the highest amplitudes can be recorded, which decrease as the DTL is positioned more toward the fornix [ 17]. Despite these differences in amplitudes, the latest ISCEV standard does not advice which DTL position should be used. The most common DTL positions are the lower lid position (LLP) and the fornix position (FP) [ 8].
In our clinic, reference values are based on ERG measurements recorded at the LLP. This position was advised by the manufacturer for two reasons. First, it would ensure high amplitudes, without much risk of scratching the cornea. Second, blinking would have little effect on the DTL position. In some cases however, we have seen the DTL shift toward the fornix during an ERG recording.
Anzeige
Some studies advise using the FP, because it would shift less easily and therefore lead to a more stable recording. The FP would yield lower amplitudes, but the ERG would be less variable [ 9– 11]. However, these studies were conducted in relatively small groups of healthy volunteers. These healthy volunteers are probably often coworkers who know how to cooperate during an ERG because they are familiar with ERG procedures. Therefore, it is useful to see whether the same results can be obtained in a large cohort of patients, who may be scared or photophobic which makes the recording of an ERG more difficult. Also, a larger group can yield more reliable confidence intervals of differences between the two DTL positions.
The aim of this study was to determine the optimal DTL electrode position for monitoring purposes. We investigated whether one DTL position yields more stable ERG results than the other. If such a difference is found, this would imply that this DTL electrode position should be used for monitoring purposes. We compared the reliability as well as the relative variability of the results and investigated differences in amplitudes and implicit times.

The subject population, consisting of 200 patients (355 uveitis eyes, 45 unaffected eyes) with a non-infectious uveitis, aged ≥ 18 years (median 53.4, IQR 39.2–63.7), has been previously described [ 18]. All patients were mentally competent and gave their written consent to participate. This study was conducted in compliance with the ethical principles of the Declaration of Helsinki. Ethical approval was requested and obtained from the Medical Ethical Research Committee of the University Medical Centre Utrecht.

All ERGs were measured according to the ISCEV standards [ 8]. An Espion E3 system with colordome stimulator (Diagnosys LLC, Cambridge, UK) was used for full-field flash stimulation. Eyes were anesthetized with oxybuprocaine 0.4%. Pupils were dilated with tropicamide 0.5%. Cup electrodes were used as ground and reference electrodes and placed on the forehead and on the temples. Impedances of reference and DTL electrodes were below 5 kΩ and below 10 kΩ for the ground electrode.
An extended ISCEV protocol was measured twice, consisting of stimulus strengths that increase with approximately 0.5 log units and range from 0.3 to 10.0 cds/m 2 for the light-adapted ERG (LA), including a 30 Hz flicker response (LA, 3.0 cds/m 2). For analyses, averages were used of two results, each consisting of five sweeps. In cases when sweeps with a trend were accepted during recording, these sweeps were toggled, or removed.
After 10 min of light adaptation, the first LA ERG was recorded with the DTL electrode in the LLP and the second with the FP (see Fig.  1). The DTL position was checked prior to each measurement and adjusted if necessary.
×

For statistical analysis, RStudio version 1.0.143 was used. To compare differences between the two DTL positions, a Wilcoxon signed rank test was used (data not normally distributed as tested with histograms, Q–Q plots and Shapiro–Wilk test).
We added a random value between − 0.25 and 0.25 ms to each implicit time, because our equipment measures every 0.5 ms. By adding this random value, the implicit time becomes a true continuous variable which has statistical advantages for calculating more reliable confidence intervals. The implicit time difference and amplitude ratio of the two DTL positions were calculated and plotted.
Anzeige
To evaluate the effect of the two DTL positions on the percentage of patients that would fall outside normal limits, we compared the results to our reference values. These reference values were obtained with the DTL in LLP and were previously described [ 18].
To investigate the amount of reliability between the two measurements, intraclass correlation coefficients (ICCs) were calculated (two-way model, type consistency, unit average). For visualization of the amount of agreement between the two positions, Bland–Altman plots were made as well.
To evaluate the amount of relative variability of the ERG data at the two DTL positions, we calculated the coefficients of variation (CoV, sd/mean), also known as relative standard deviation. The data were transformed (square root) to fit a normal distribution. This was necessary since the results of uveitis patients can range from normal to abnormal which gives a skewed distribution [ 18]. Normality was evaluated using Shapiro–Wilk tests, histograms and Q–Q plots. We used the R package cvequality (version 0.1.3; Marwick and Krishnamoorthy 2018) to test for significant differences in CoV. Using Bonferroni’s correction, we defined P values of < 0.006 as statistically significant. All significances were two-tailed.

This study was supported by the following foundations: Dr. F.P Fischer Stichting and Bartiméus Fonds that contributed through UitZicht. The funding organizations had no role in the design or conduct of this research. They provided unrestricted grants. A.H. Brouwer received an Association for Research in Vision and Ophthalmology (ARVO) International Chapter Affiliate Travel Grant. G.C. de Wit is employed as a medical physicist at Bartiméus, a Low Vision Institute in the Netherlands. Furthermore, he is a sole proprietor; with his company Optical Diagnostics ( http://​www.​opticaldiagnosti​cs.​com), he develops and sells ophthalmic software products and does sometimes consulting work. J.H. de Boer was paid by AbbVie for lectures. M.M. van Genderen has no financial disclosures.

All procedures performed in studies involving human participants were in accordance with the ethical standards of the Medical Ethical Research Committee of the University Medical Centre Utrecht and with the 1964 Helsinki Declaration and its later amendments or comparable ethical standards. 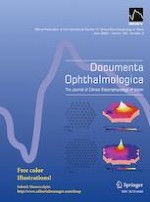 Electroretinograms of eyes with Stickler syndrome