This study investigated the association between the prevalence of oral health problems (caries, gingivitis, mucosal pigmentation and enamel defects in one to 5 year-old children exposed and not exposed to environmental tobacco smoke before and/or after birth. Exposure to environmental tobacco smoke (ETS) in childhood may have significant health effects.

The 44 children (aged 15–69 months) recruited were divided into two groups: ETS and non-ETS (control). There were 22 children in each: 16 who were exposed to ETS during and after gestation were identified as the ETSB subgroup. Participants exposed to ETS were more likely to have had upper respiratory tract and middle ear infections during the neonatal period and had higher mean dmft, mean dmfs, mean percent of surfaces with demarcated opacities and mean GI than the non-ETS participants. The children exposed to ETS before and after birth had the highest occurrence of enamel opacities showed a higher risk for dental caries even though more children in this group used the recommended fluoride toothpaste (1000 ppm fluoride). Mothers who smoked either never breastfed their children or breastfed their children for less than the recommended period of 6 months. Children exposed to ETS were shown to have higher mean total sIgA (μg/ml) than the children in the control group.

Associations between ETS exposure before and after gestation and oral health, including salivary changes in young children were shown in the present study. Dental health professionals should include a question about household smoking in children’s dental histories, which would allow opportunities to discuss the impact of smoking on child oral health. Longitudinal oral health studies should include a history of maternal smoking during pregnancy and afterwards. 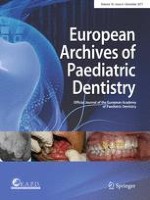 Effects of nicomethanol hydrofluoride on dental enamel and synthetic apatites: a role for anti-caries protection

The prevalence of sleep bruxism and associated factors in children: a report by parents