Establishing gait symmetry is a major aim of amputee rehabilitation and may be more attainable with powered prostheses. Though, based on previous work, we postulate that users transfer a previously-learned motor pattern across devices, limiting the functionality of more advanced prostheses. The objective of this study was to preliminarily investigate the effect of increased stance time via visual feedback on amputees’ gait symmetry using powered and passive knee prostheses.

Five individuals with transfemoral amputation or knee disarticulation walked at their self-selected speed on a treadmill. Visual feedback was used to promote an increase in the amputated-limb stance time. Individuals were fit with a commercially-available powered prosthesis by a certified prosthetist and practiced walking during a prior visit. The same protocol was completed with a passive knee and powered knee prosthesis on separate days. We used repeated-measures, two-way ANOVA (alpha = 0.05) to test for significant effects of the feedback and device factors. Our main outcome measures were stance time asymmetry, peak anterior-posterior ground reaction forces, and peak anterior propulsion asymmetry. 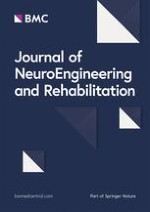 Interaction between position sense and force control in bimanual tasks

Need for mechanically and ergonomically enhanced tremor-suppression orthoses for the upper limb: a systematic review

Long-term use of implanted peroneal functional electrical stimulation for stroke-affected gait: the effects on muscle and motor nerve