This study enrolled 80 knees undergoing posterior-stabilized TKA. For 60 varus knees, parapatellar, midvastus, and subvastus approaches were used in 20 knees each. For 20 valgus knees, a lateral subvastus approach was used. Component gap length and inclination were measured intra-operatively using a specific tensor device under 40 lb with the patella reduced or shifted laterally, at 0°, 45°, 90°, and 135° of knee flexion.

Mean gap lengths at 45° and 90° of knee flexion were significantly larger with the parapatellar approach than with midvastus or lateral subvastus approaches (P < 0.05). Regarding gap inclination, varus angle increased linearly through the entire arc of flexion in all four approaches. When the patella was shifted laterally, gap lengths at 45°, 90°, and 135° were significantly reduced compared with those for the patella reduced in the subvastus approach, whereas gap length was constant in the parapatellar approach, regardless of patellar position.

Joint gap kinematics was not consistent within four different approaches and two different patellar positions. Relatively large gaps at 45° and 90° were unique features for the parapatellar approach. Surgeons should be aware that the flexion gap is reduced when the patella is shifted laterally in vastus medialis-preserving approaches such as the subvastus approach. 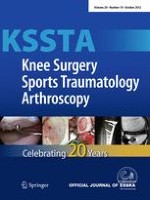 Reply to: Letter regarding manuscript: KSST-D-11-00615R3: ‘A randomised controlled trial for the effectiveness of intra-articular Ropivacaine and Bupivacaine on pain after knee arthroscopy: the DUPRA (DUtch Pain Relief after Arthroscopy)-trial’

The MRI findings of meniscal root tear of the medial meniscus: emphasis on coronal, sagittal and axial images