Laparoscopic percutaneous extraperitoneal closure (LPEC) is known to reduce the incidence of metachronous contralateral hernia (MCH) compared to conventional hernia repair. We herein describe the effects of insistent screening for an irregular orifice of the contralateral patent processus vaginalis (CPPV).

All patients who underwent LPEC between 2003 and 2013 were reviewed. We started insistent screening for a CPPV in July 2010. The surgically treated cases before June 2010 were assigned to the former group, while those treated after July 2010 were in the latter group. The data were retrospectively collected from medical records. The statistical analysis was performed using the Mann–Whitney U test or Chi square test. A value of P < 0.05 was considered to be significant.

The increased detection of a CPPV by insistent screening seemed to cause a decrease in the incidence of MCH. 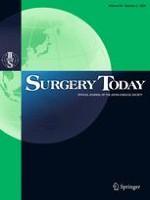 Comparisons of financial and short-term outcomes between laparoscopic and open hepatectomy: benefits for patients and hospitals

Could the Tokyo guidelines on the management of acute cholecystitis be adopted in developing countries? Experience of one center