We reviewed consecutive patients who received rivaroxaban before atrial fibrillation ablation and compared them to patients on no anticoagulant. The dosage of heparin required to achieve ACT > 300 s was evaluated. We then tested determinants of heparin dosage prospectively.

In patients undergoing atrial fibrillation ablation on rivaroxaban, the effective duration of heparin is prolonged and the procedural heparin requirement is significantly greater. Heparin dosage can be predicted by baseline ACT, but not influenced by duration on or withdrawal of rivaroxaban. 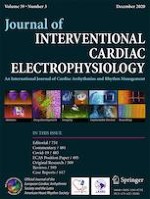 Image-guided ablation of scar-related ventricular tachycardia: towards a shorter and more predictable procedure