The aim of this study was to investigate the effects of root-end filling after periapical surgery on the fractal dimension (FD) of the periapical bone.

FD was significantly increased in both groups over time (p < 0.05). The increases in FD between groups were not significant (p > 0.05).

Mathematical morphology combined with the box-counting method showed that the FD change was independent of the root-end filling at the 1-year follow-up after periapical surgery.

Because of the complex anatomy of the root canal, orthograde endodontic treatment may be inadequate and periapical surgery becomes an alternative in these cases. In this study, the effect of root-end filling on the increase in trabecular bone after periapical surgery was investigated using fractal analysis. 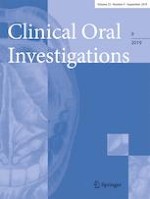 Hyaluronic acid as adjunctive to non-surgical and surgical periodontal therapy: a systematic review and meta-analysis

Botulinum toxin type A applications for masticatory myofascial pain and trigeminal neuralgia: what is the evidence regarding adverse effects?

Relationship between the anatomic structures and mandibular posterior teeth for endodontic surgery in a Turkish population: a cone-beam computed tomographic analysis