A total of 244 participants, 120 in the TC group and 124 in the rehabilitation group, were included in final analysis. There was no siginificant difference in Tai Chi Yunshou and balance rehabilitation training on the improvement of balance ability and mobility (P = 0.531 and P = 0.839, respectively) after adjustment for baseline. However, there was significant difference between two groups on improvement of motor funtion (P = 0.022), fear of falling (P < 0.001) and depression (P = 0.035) for the post stroke patients. No adverse events were reported during the study.

Tai Chi Yunshou and balance rehabilitation training led to improved balance ability and functional mobility, and both are suitable community-based programs that may benefit for stroke recovery and community reintegration. Our data demonstrated that a 12-week Tai Chi Yunshou intervention was more effective in motor function, fear of falling and depression than balance rehabilitation training. Future studies examining the effectiveness of Tai Chi Yunahou as a balance ability improvement strategy for community-dwelling survivors of stroke are recommended. 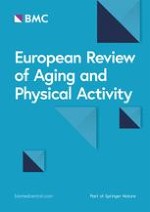 Premorbid physical activity is modestly associated with gait independence after a stroke: an exploratory study

Barriers and facilitators to adherence to group exercise in institutionalized older people living with dementia: a systematic review