We investigated the effects of tolvaptan, a vasopressin V2-receptor antagonist, on diuretic response and systemic and renal hemodynamic characteristics in conscious dogs with congestive heart failure (CHF). We also compared these effects with those of furosemide, a loop diuretic.

CHF was induced by rapid right-ventricular pacing at 260 beats/min for at least 3 weeks, and maintained with a pacing rate of 220–240 beats/min. CHF dogs were orally given tolvaptan (10 mg/kg), furosemide (10 mg/kg) and vehicle in random order during the stable CHF state. Urine excretion, systemic and renal hemodynamic parameters, and plasma hormone levels were measured over 6-hour periods after drug administration.

Tolvaptan elicited a potent aquaretic response and reduced the cardiac preload without unfavorable effects on systemic or renal hemodynamics, the renin–angiotensin–aldosterone system, or the sympathetic nervous system in CHF dogs. Thus, tolvaptan may offer a novel approach to remove excess water congestion from patients with CHF. 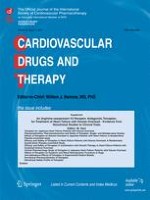 Efficacy and Safety of Tolvaptan in Heart Failure Patients with Sustained Volume Overload despite the Use of Conventional Diuretics: A Phase III Open-Label Study