Hypoalbuminemia can be caused by malnutrition, inflammation, hemodilution, nephrotic syndrome, or cachexia. Hypoalbuminemia is an independent prognostic factor in hospitalization for heart failure (HHF) [ 1– 3]. Hypoalbuminemia is related to the resistance of loop diuretics, e.g., urinalysis [ 4], as a result of decreased delivery of drugs to the kidneys, although a bolus injection of furosemide with albumin [ 4] or continuous infusion of this combination [ 5] has been reported to improve diuresis in patients with hypoalbuminemia. Proteinuria is also one of the mechanisms of the diuretic resistance [ 6] and poor outcome of HHF [ 7, 8]. Thus, it has been well known that hypoalbuminemia or proteinuria is an important factor of diuretic resistance [ 9].
Tolvaptan is an oral non-peptide, selective antagonist of vasopressin receptor-2. Tolvaptan is used for the treatment of the following: hyponatremia in the United States; syndrome of inappropriate secretion of antidiuretic hormone in the European Union; and volume overload in patients with heart failure in several Asian countries. Several clinical trials and studies have demonstrated marked improvement of congestion in HHF patients [ 10, 11]. According to Starling’s law, a low plasma oncotic pressure due to hypoalbuminemia induces a fluid shift from the intravascular space to the interstitial space, and there is clinical evidence that hypoalbuminemia facilitates the onset of cardiogenic pulmonary edema [ 12]. Tolvaptan produces a free-water diuresis and could increase osmotic pressure in the acute setting. Therefore, it is thought that the net effect of tolvaptan could produce a sustained movement of fluid from the extravascular space to the vascular space [ 13]. Those observations suggest that, with appropriate urinalyses, tolvaptan may help to improve congestion. In liver cirrhosis, tolvaptan has been reported to improve hepatic edema independent of the serum level of albumin [ 14]. However, the efficacy of tolvaptan has not been examined thoroughly in HHF patients with relatively moderate-to-severe hypoalbuminemia or proteinuria. The aim of the present study was to examine the diuretic effect of tolvaptan in such HHF patients.
Anzeige 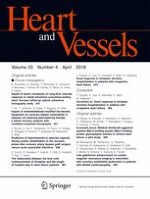