Respiratory-swallow coordination (RSC) is important for swallowing safety. Atypical RSC is common in Parkinson’s disease (PD) and is associated with the presence of dysphagia and aspiration. Verbal cueing is known to affect RSC in healthy adults, yet an understanding of its effect on RSC in PD is unknown. Therefore, the aims of this study were to: (1) assess the effects of verbal cueing on respiratory-swallow patterning, lung volume initiation, and swallow apnea duration in PD; and (2) determine when during tidal breathing verbal cues should be given in order to increase the likelihood of eliciting optimal RSC. People with PD were prospectively recruited for respiratory-swallowing assessments during cued and non-cued swallowing conditions. Non-cued trials consisted of swallowing in an unprompted fashion, while cued trials consisted of swallowing only once participants were verbally instructed. Verbal cues were given at four specific points during tidal breathing. Nonparametric tests were used to compare differences in patterning, lung volume, and swallow apnea duration between the cued and non-cued swallows. Twenty-five people with PD were enrolled, yielding an analysis of 375 swallows. Verbal cueing significantly affected respiratory-swallow patterning (p < 0.0005), lung volume initiation (p < 0.0005), and swallow apnea duration (p < 0.0005). The effects of verbal cueing on RSC differed significantly depending on when during tidal breathing verbal cues were given. Cues given at high tidal inhalation were most likely to elicit optimal RSC, while cues given at low tidal exhalation were the least likely to elicit optimal RSC. The results of this study demonstrate that verbal cueing significantly affects RSC in PD. Depending on when verbal cues are given during tidal breathing, RSC can become more safe and coordinated or more atypical and risky. Clinicians should be cognizant of these effects by avoiding verbal cues if attempting to evaluate normal RSC during swallowing evaluations and cueing for swallows at the time of high tidal inhalation when targeting more optimal RSC in PD. 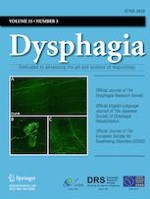 Correction to: Cervicofacial and Pharyngolaryngeal Lymphedema and Deglutition After Head and Neck Cancer Treatment

Which Factors Affect the Severity of Dysphagia in Lateral Medullary Infarction?