Several antiviral agents licenced for blocking mother-to-child transmission (MTCT) of HBV, but their relative efficacy beginning from different trimesters has scarce been evaluated. We aimed to conduct a network meta-analysis to statistically differ the efficacy and safety of each antiviral agents initiating on different timings in preventing mother-to-infant transmission of HBV.

3 Randomized and 32 nonrandomized studies enrolling 6738 pregnant female were included. Using network analysis, any antiviral agent interrupted HBV vertical transmission much more effectively than placebo. No agent showed significant efficacy different from others, but a strong trend toward significance was found in telbivudine and tenofovir, of which had the highest probability of being ranked the first- or second-best treatment for reducing MTCT of HBV. The treatment applied in the first and second trimester had a similar efficacy in preventing MTCT. Compared with the initiation during the third trimester, lower rate of MTCT was revealed when antiviral therapy was administrated before third trimester, (RR = 0.045, 95% CI 0.0053 to 0.20); a similar effect at delivery on suppressing maternal HBV DNA level and converting serum HBeAg were achieved if the timing of antiviral treatment started prior, but an obvious improvement of normalizing ALT flare was calculated out; no statistically differences among maternal and fetal safety outcomes were found if mothers received antiviral agents before pregnant 28 weeks.

This network meta-analysis recommended the earlier use of telbivudine or tenofovir, tends to be better to prevent MTCT of HBV in pregnancy with no increased adverse maternal or fetal outcomes. 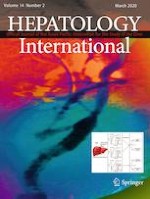 Effect of hepatitis B surface antibody in patients with core antibody-positive liver transplantation: a systematic review and meta-analysis

The epidemiology of NAFLD in Mainland China with analysis by adjusted gross regional domestic product: a meta-analysis

Portal flow in acute hepatitis B flare in non-cirrhotic patients