The presence of portal vein tumor thrombosis (PVTT) is a poor prognostic factor for patients with hepatocellular carcinomas (HCC). The purpose of this study was to determine the treatment effect of irradiation in combination with hepatic arterial infusion chemotherapy (HAIC) for these patients.

We retrospectively examined the outcome of 67 HCC patients with PVTT of the main trunk or first branch who received HAIC alone or with concurrent irradiation for PVTT (CCRT). 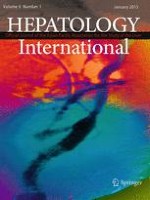 Reimbursement policies in the Asia-Pacific for chronic hepatitis B

HCV genotype 1 subtypes (1a and 1b): similarities and differences in clinical features and therapeutic outcome