Pain following bariatric surgery can be quite troublesome and prolongs recovery. Transversus abdominis plane (TAP) block is a new regional anesthetic technique to reduce postoperative pain and is an important part of current analgesic regimen for many abdominal surgeries. The primary objective of our study was to assess the efficacy of the TAP block in controlling postoperative pain in laparoscopic sleeve gastrectomy. Secondary outcomes assessed in this study were postoperative nausea and vomiting (PONV), time to ambulate, readiness for discharge, and whether it leads to improved patient satisfaction.

Sixty patients were enrolled in the study after fulfilling the eligibility criteria. No patient was lost to follow-up. The difference of VAS scores between test (TAP) and control (Non-TAP) was statistically significant both at rest and on movement. The patient satisfaction score in TAP group was higher than the control group (p value < 0.001). The patients who received TAP block showed earlier readiness for discharge, early ambulation, early resumption of bowel activity, and decreased incidence of PONV as compared to the non-TAP group.

USG-guided TAP block is a feasible, minimally invasive technique and can be a part of an effective multimodal analgesia in morbidly obese patients undergoing bariatric surgery. Limitations of this study would be the small sample size and the study being Single-blinded. 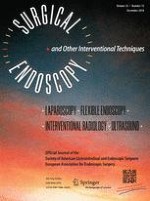 The importance of early recognition in management of ERCP-related perforations