There is growing public and legislative body support for the medical use of cannabis products, for example, for chemotherapy-induced nausea and vomiting (CINV), in Germany.

Six systematic reviews of RCTs included the pharmaceutical CBs dronabinol, levonantradol, and nabilone or whole plant extract (e.g., nabiximol) compared with placebo or conventional antiemetics. There was moderate quality evidence on the efficacy of CBs compared to placebo and conventional antiemetics for CINV. There was moderate quality evidence that pharmaceutical CBs were less tolerated and less safe than placebo and conventional antiemetics in CINV. One RCT examining whole plant extract was included into the systematic reviews. No RCT was found comparing CBs with neurokinine−1 receptor antagonists.

With safe and effective antiemetics available, CBs cannot be recommended as first- or second-line therapy for CINV. Some guidelines recommend pharmaceutical CBs as third-line treatment in the management of breakthrough nausea and vomiting. Due to the lack of RCT data and safety concerns, herbal cannabis cannot be recommended for CINV.
Anzeige 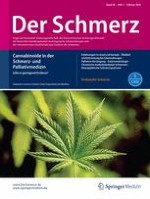