A relevant number of patients presenting for electrical cardioversion carry a pacemaker (PM) or ICD. Case reports suggest a potential hazard of external cardioversion/defibrillation. The incidence of shock related device complications is unknown. No guidelines or recommendations by international medical societies for a cardioversion protocol of cardiovascular implantable electronic device (CIED) patients exist. We conducted a nationwide survey to gather real-world clinical data on the current clinical approach towards these patients during electrical cardioversion and to estimate the incidence of shock-related complications.

Ninety hospitals with > 380 ECV in 2014 were identified from mandatory hospital quality reports and 60 were randomly selected. All centers were provided with a standardized questionnaire on the general proceedings and complications during electrical cardioversion of pacemaker, ICD and CRT patients (CIED patients). Thirty-two centers (53%) participated in the survey. In total, 16,554 ECV were reported (534 ± 314 per center). Biphasic cardioversion with a first shock energy of ≥ 150 J via adhesive patches in antero-posterior orientation was preferred by most centers (78%). Eleven percent (n = 1809) of pts were reported to carry a PM/ICD. The ECV protocol was heterogeneous among centers. Complications associated with electrical cardioversion were reported in 11/1809 patients (0.6%), all were transitory elevations of pacing thresholds. 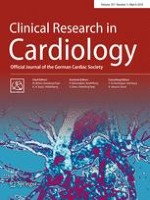 Association between hypo- and hyperkalemia and outcome in acute heart failure patients: the role of medications