Cystic fibrosis per se can sometimes lead to hyponatremia, hypokalemia, hypochloremia or hyperbicarbonatemia. This tendency was first documented 60 years ago and has subsequently been confirmed in single case reports or small case series, most of which were retrospective. However, this issue has not been addressed analytically. We have therefore systematically reviewed and analyzed the available literature on this subject.

This was a systematic review of the literature.

The reports included in this review cover 172 subacute and 90 chronic cases of electrolyte imbalances in patients with cystic fibrosis. The male:female ratio was 1.57. Electrolyte abnormalities were mostly associated with clinically inapparent fluid volume depletion, mainly affected patients aged ≤2.5 years, frequently tended to recur and often were found before the diagnosis of cystic fibrosis was established. Subacute presentation often included an history of heat exposure, vomiting, excessive sweating and pulmonary infection. History of chronic presentation, in contrast, was often inconspicuous. The tendency to hypochloremia, hypokalemia and metabolic alkalosis was similar between subacute and chronic patients, with hyponatremia being more pronounced (P < 0.02) in subacute compared to chronic presentations. Subacute cases were treated parenterally; chronic ones were usually managed with oral salt supplementation. Retention of urea and creatinine was documented in 38 % of subacute cases.

The findings of our review suggest that physicians should be aware that electrolyte abnormalities can occur both as a presenting and a recurring feature of cystic fibrosis. 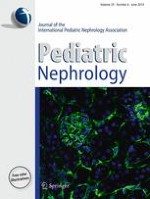 Erratum to: Renal impairment in children with posterior urethral valves