The aim of this study was to determine whether renal unresponsiveness to aldosterone associated with hyperkalemia is present in infants with acute pyelonephritis in the absence of significant urinary tract anomalies and to describe the clinical characteristics of patients presenting an inadequate renal response to hyperkalemia. The patient cohort comprised 113 infants with acute pyelonephritis (APN), based on the criteria of a temperature >38°C and significant bacteriuria. Serum and urine electrolytes, creatinine, osmolality, and renal tubular function tests were performed at diagnosis. The findings were compared to those present in 75 children who had fever without significant bacteriuria. Hyperkalemia (>5.5 mmol/L) was observed in infants with an APN diagnosis, who exhibited a lower transtubular potassium concentration gradient (TTKG) and a higher fractional sodium excretion. We defined inadequate renal response to hyperkalemia as the combination of hyperkalemia and TTKG below the normal range established for the age of the subject. Infants presenting an inadequate response to hyperkalemia were younger and associated more frequently with an APN diagnosis. This alteration could be explained by the renal interstitial inflammation present in acute pyelonephritis and the immaturity of the renal tubular responsiveness to aldosterone due to infancy in the absence of urinary tract infection or obstruction. 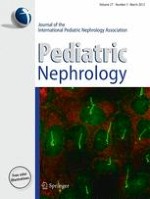