This paper is to examine the relationship between anti-cyclic citrullinated peptide (anti-CCP) antibody titers and the development of interstitial lung disease (ILD) in patients with and without rheumatoid arthritis (RA). A retrospective investigation was conducted on all adult patients tested for anti-CCP between January 1, 2007, and December 31, 2012, in a university healthcare system. Patients with specified exposures or conditions known to cause ILD were excluded. The prevalence of ILD was compared between those with and without a positive CCP. The study population was then divided into four titer groups based on anti-CCP titers: negative, low titer, moderate titer, high titer. Fisher’s exact tests compared the prevalence of ILD among the anti-CCP titer groups. Multivariate logistic regression examined the association between anti-CCP and ILD while controlling for confounders. These analyses were repeated in two subgroups: a “confirmed RA” subgroup and an “unconfirmed RA” subgroup. Two thousand and thirty patients met inclusion criteria and 453 of those had confirmed RA. Progressively higher anti-CCP titer groups developed an increasingly higher prevalence of ILD (p < 0.01). When adjusting for age, tobacco, and a diagnosis of RA, higher anti-CCP titer groups continued to correlate with an increased prevalence of ILD (OR 1.47, 95% CI 1.10–1.96, p < 0.001). This study is the first to show that progressively higher anti-CCP titers correlate with increasing prevalence of ILD, even when adjusting for confounders. 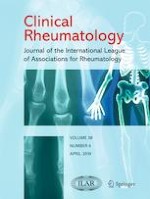