The purposes of this human study using high-resolution manometry were to verify whether the swallowing reflex can be evoked by intra-esophageal fluid injection and whether the reflex latency and manometric variables differ depending on the injected location, amount, or speed. Ten healthy individuals participated in this study. The tip of the intranasal catheter for injection was placed at 5 cm (upper), 10 cm (upper-middle), 15 cm (lower-middle), or 20 cm (lower) from the distal end of the upper esophageal sphincter (UES). An intra-esophageal injection of 3 mL or 10 mL of thickened water was administered and controlled at 3 mL/s or 10 mL/s. Latencies from the start of the injection to the onset of UES relaxation were compared regarding injection locations, amounts, and rates. Manometric variables of intra-esophageal injection and voluntary swallowing were compared. The latency became shorter when the upper region was injected. Latency after the 10-mL injection was shorter than that after the 3-mL injection (p < 0.01) when faster injection (10 mL/s) was used. Faster injection induced shorter latency (p < 0.01) when a larger volume (10 mL) was injected. Pre-maximum and post-maximum UES pressures during voluntary swallowing or during spontaneous swallowing when injecting the upper esophageal region were significantly higher than spontaneous swallowing at other regions (p < 0.01). Intra-esophageal fluid injection induces the swallowing reflex in humans. The most effective condition for inducing the swallowing reflex involved a larger fluid amount with a faster injection rate in the upper esophagus. 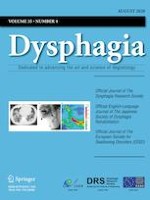 The Swallowing Characteristics of Thickeners, Jellies and Yoghurt Observed Using an In Vitro Model