Among children with craniosynostosis, there exists an interesting dynamic involving parents’ preconceptions of craniosynostosis and its repair, influenced in large part by differing cultural perspectives. In a time in which we are understanding how critical a child’s early formative years are in influencing his/her emotional and psychological development, the authors describe one medical aspect involved in that dynamic process.

The authors reviewed their cumulative experience at the Children’s Hospital San Diego between January 2000 and June 2004 and identified nine children with significant craniofacial deformities and, for one reason or another, had delayed surgical repair.

The authors have found that by age 6, parents will often bring their children back to their physician and insist on surgical correction. The significant motivating factor in most of these cases stems from teasing by classmates with respect to head shape. In this manuscript, we report and discuss some of the emotional and psychological issues associated with delayed craniosynostosis repair. Often times, these issues are overlooked or underemphasized in the overall surgical care of such patients. 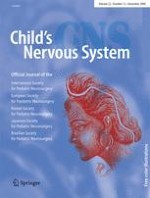 Why a Focus Session on endoscopic third ventriculostomy in infants?

Germinoma with synchronous lesions in the pineal and suprasellar regions

Thalamic gliomas in children: an extensive clinical, neuroradiological and pathological study of 14 cases