Sodium glucose co-transporter 2 (SGLT2) is abundantly expressed in proximal tubular cells and mediates approximately 90% of glucose reabsorption within the kidney. SGLT2 inhibitors are a new class of oral antidiabetic drugs (OADs) that specifically target glucose reabsorption in the kidney, thereby facilitating glucose excretion into urine. This removal of excess glucose from the body is associated with a reduction in blood glucose levels in patients with type 2 diabetes (T2D) [ 1]. Moreover, the inhibition of glucose reabsorption mediated by SGLT2 inhibitors leads to increased osmolarity within the tubular lumen. Consequently, previous clinical studies with SGLT2 inhibitors have reported that treatment initiation with this drug class induced diuresis and led to a transient increase in overall urine volume [ 2, 3].
Empagliflozin (Jardiance ®; Boehringer Ingelheim), a highly selective SGLT2 inhibitor [ 1], is approved in Europe, Japan, and the US for the treatment of hyperglycemia in patients with T2D [ 4, 5]. Moreover, empagliflozin is the first OAD to demonstrate a significant reduction (of 38%) in the risk of cardiovascular (CV) death as compared to standard-of-care therapy in a large cardiovascular outcomes trial in patients with T2D and established CV disease [ 6]. In previous phase 2–3 clinical trials, treatment with once-daily empagliflozin significantly ameliorated hyperglycemia, irrespective of commonly used glucose-lowering background therapy, and was well tolerated overall in T2D patients, including those of Japanese ethnicity [ 7– 10].
Anzeige
In a pharmacodynamic study of Caucasian patients with T2D, initiation of empagliflozin treatment led to a transient increase in 24-h urine volume [ 2]. However, respective data for Japanese T2D patients and further effects of empagliflozin on daily fluid intake were scarce. Therefore, in the post hoc analysis reported in the present paper, we assessed changes in 24-h urine volume, fluid intake, and fluid balance in Japanese patients with T2D after the initiation of empagliflozin treatment in a previously completed local, randomized, controlled phase 2 trial [ 8].

The trial design, eligibility criteria, and treatment allocations have been described previously [ 8]. Briefly, in this prospective, randomized, double-blind, multiple-dose, parallel-group, placebo-controlled clinical trial, 100 Japanese patients with T2D were randomized (1:1:1:1:1) to receive 1 mg ( n = 19), 5 mg ( n = 21), 10 mg ( n = 20), or 25 mg ( n = 19) empagliflozin or placebo ( n = 21) once-daily for 4 weeks (NCT00885118). At baseline, all study participants were treatment naïve, allowing for a 30 days washout of previous glucose-lowering medications during the run-in period (Fig.  1). According to the study protocol, individuals were not eligible for this study if they had received concomitant diuretic background therapy. This report focused on the 10 mg and 25 mg empagliflozin treatment arms of the study, since they represent the approved doses of empagliflozin in Japan. The clinical trial (NCT00885118) was conducted in accordance with the Declaration of Helsinki (1996), the International Conference on Harmonisation Good Clinical Practice guidelines, and Japanese GCP regulations. Additionally, the local ethics committee (institutional review board) approved the study protocol. Written consent was received from all participants before study commencement.
×

Urine volume, fluid intake, and fluid balance were measured over 24 h on days − 2 (baseline), 1, 27, and 28 during the in-patient period (Fig.  1). Participants were instructed how to collect 24-h urine samples, and it was requested that containers with urine should be stored in refrigerators during all collection periods. The total weight of 24-h urine volume was calculated by subtracting the standardized weight of the empty container from the total weight of the container at the end of each collection period. Without further adjusting for urine gravity, 1 kg urine was assumed to equal 1 L. Study participants were allowed to consume fluids only after receiving approval from the investigators during the in-patient period, which facilitated the monitoring of fluid intake. Consequently, the daily fluid intake of the study participants was documented by investigators from 8:00 a.m. to 7:59 a.m. on the following day. The 24-h fluid balance was calculated as the difference between the 24-h urine volume and the 24-h fluid intake.

Descriptive statistics were used for all the endpoints. In this post hoc analysis, changes in 24-h urinary volume, fluid intake, fluid balance, and serum urea from baseline were assessed using an analysis of covariance model with treatment as a fixed effect and the baseline for each endpoint as a covariate. Treatment comparisons were done between the empagliflozin groups and the placebo group. Two-sided p values < 0.05 were considered significant.
Anzeige

We previously reported that 24-h urinary glucose excretion (UGE) was significantly increased on day 1 with either empagliflozin 10 or 25 mg, and a significant increase in 24-h UGE was maintained throughout the active treatment period until day 28 (Fig.  2a) [ 8]. On day 1, 24-h urine volume increased significantly in patients treated with the 10 mg and 25 mg doses of empagliflozin compared to placebo (adjusted mean change from baseline at day 1 was + 0.83, + 1.08, and + 0.29 L/day in the 10 mg and 25 mg empagliflozin groups and the placebo group, respectively; both p < 0.001 versus placebo) (Fig.  2b). However, after the chronic treatment period of 4 weeks, the 24-h urine volume was comparable between the empagliflozin 10 mg and 25 mg groups and placebo on days 27 and 28, respectively (Fig.  2b).
×

Empagliflozin was associated with a transient increase in diuresis in Japanese patients with T2D within the first 24 hours of treatment. Thereafter, urine volume returned towards placebo levels after 4 weeks of therapy with empagliflozin. Neither an increased daily fluid intake nor events consistent with dehydration were observed with empagliflozin throughout the 4-week treatment period. Our findings support an early and effective compensatory mechanism of the kidney that  in order to maintain whole-body fluid balance, despite sustained glucosuria, in Japanese T2D patients treated with empagliflozin. Clinical evidence relating to empagliflozin supports safe and effective treatment initiation in appropriate Japanese patients with T2D without an excess risk of undesirable volume-related events.

The authors would like to thank Kazuki Koiwai for acquiring and interpreting data relating to this study.

All named authors meet the International Committee of Medical Journal Editors (ICMJE) criteria for authorship for this manuscript, take responsibility for the integrity of the work as a whole, and have given final approval to the version to be published. All authors had full access to all the data in this study and take complete responsibility for the integrity of the data and accuracy of the data analysis.

This clinical trial (NCT00885118) was conducted in accordance with the Declaration of Helsinki (1996), the International Conference on Harmonization Good Clinical Practice guidelines, and Japanese GCP regulations. Additionally, the local ethics committee (institutional review board) approved the study protocol. Written consent was received from all participants before study commencement.
Anzeige

The datasets analyzed during the current study are available from the corresponding author on reasonable request. 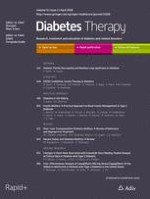 Changes in Heart Rate Associated with Exenatide Once Weekly: Pooled Analysis of Clinical Data in Patients with Type 2 Diabetes

Author Correction: Effectiveness and Safety of a Novel Care Model for the Management of Type 2 Diabetes at 1 Year: An Open-Label, Non-Randomized, Controlled Study

Effectiveness and Safety of a Novel Care Model for the Management of Type 2 Diabetes at 1 Year: An Open-Label, Non-Randomized, Controlled Study