Although it has been established that unemployment and underemployment increase distress and depression, the psychological mechanisms involved are not very clear. This study examines the roles of social support and coping strategies as mediators of the association between employment status and mental health, as well as gender and age differences as moderators. Residents from the epidemiological catchment area of south-west Montreal responded to a randomized household survey for adults in 2009. A follow-up was conducted based on participants’ employment status 2 and 4 years later. ANOVAs tests were computed with SPSS to evaluate group differences, and structural equation modeling was performed with AMOS to test mediation effects. At baseline, among participants between 18 and 64 years old (n = 2325), 14.3 % were unemployed/not studying, 14.4 % worked part-time, and 56.5 % worked full-time. Employment status was found to significantly affect depression among those under 45 years old (chi-square = 23.4, p < 0.001). Results showed a negative association of full-time employment with depression, which was fully mediated by social support, less coping with drugs/medication, and less distress. A negative association with full-time employment was also noted with distress, which was partially mediated by increased social support, coping with alcohol, and less coping with drugs/medication. The total indirect effect suggests that full-time employees generally have more resources and do not tend to use avoidance strategies like coping with drugs/medication, resulting in less distress (β = −0.05; p < 0.01) and depression (β = −0.028; p < 0.01). Results suggest that optimal impact on mental health could be attained when increasing employment, namely full-time employment, in communities. 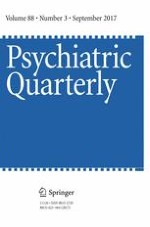 Variation in Major Depressive Disorder Onset by Place of Origin Among U.S. Latinos

Patient-Therapist Perspective of the Working Alliance in Psychotherapy

Detecting incipient schizophrenia: a validation of the Azima battery in first episode psychosis